Geography
Yukon Territory, Canada’s last frontier, is largely a mountainous and forested wilderness. It is bisected by the valley of the Yukon River, which passes to the west of the Mackenzie Mountains. Mount Logan, in the St. Elias Range on the border with Alaska, is the second highest peak in North America at 5959 meters (19,550 ft).

The Cassiar and Alaska highways converge at Watson Lake, a weather-beaten junction that straddles the 60th Parallel and marks the entrance to the Yukon Territory, perhaps the most exhilarating and varied destination in this part of the world. Taking its name from a Dene word meaning “great,” it boasts the highest mountains in Canada, wild sweeps of forest and tundra, and the fascinating nineteenth-century relic, Dawson City. The focus of the Klondike gold rush, Dawson was also the territory’s capital until that role shifted south to Whitehorse, a town booming on tourism and the ever-increasing harvest of the Yukon’s vast mineral resources. 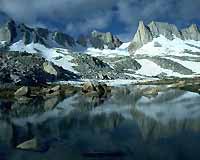 Climate
Summers in the Yukon are warm, with almost continuous daylight during June. Summer days can be hot, but sweaters and light jackets are advised for the evenings. The winters are bitterly cold. Thermal underwear, wool sweaters, parkas, wool gloves or mittens and mukluks or felt-lined boots are worn in winter.

Culture
As far as recreation goes, the most important sport in the Yukon Territory is skiing. Canoeing, hiking, mountain climbing, horseriding, dog sledding, rafting and fishing are also available in many wilderness areas.

There are restaurants throughout the area, but the best selection is in Whitehorse, Dawson City and Watson Lake. Nightlife is most lively during the historical festivals that mirror the energy of the pioneers that explored the region. Dawson City has legalised gambling, live theatre and a floor show at Gertie’s featuring Cancan girls and honky-tonk piano.